An example of a GUI technique known as “Recent Places list”

A GUI technique known as “Recent Files list” is used for at least 20 years and became a de-facto standard. Look at, for example, a screenshot from Adobe Reader: 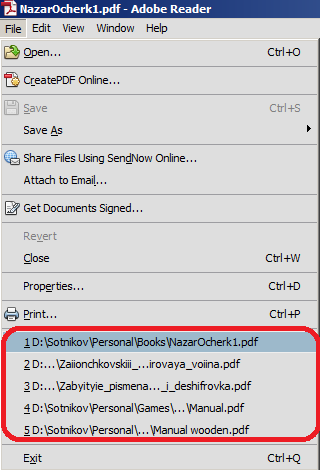 Some time ago I have met an improvement of the technique in MS Word 2010 – look below:

As you see, in addition to the Recent Documents list the GUI now contains another list called Recent Places (in other words – “recently opened folders”).
Indeed – in addition to the scenario “to re-open one of the recently opened file” another scenario is quite possible: “to open one of the recently visited folders and then browse it for a file”. Microsoft has recognized this scenario and introduced the Recent Places list for it.
It seems the improvement has proven to be useful – because of Microsoft saved the Recent Places in MS Word 2013 too, but in a little different form:

Conclusion
I hope Microsoft has not patented this solution yet :-).
So if your application already uses the well-known  “Recent Files list” technique, think – maybe it makes sense to add the Recent Places too? It will help your users finding what they need.
Bottom of Form
Tags: usability techniques
Subscribe